How Many Players Are On A Hockey Team 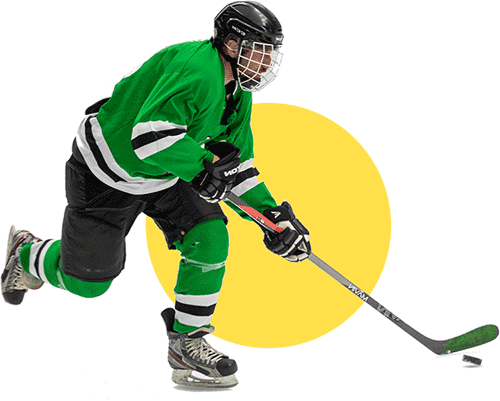 How Many Players Are On A Hockey Team?

The number of players on a team varies by the sport. Football by far has the most players on a roster with 53 players, not including the practice squad. Baseball teams can have 26 on the bench, but a roster of 40 players. Basketball is particularly interesting as they can carry 15 during the regular season and then 20 in the postseason, possibly the smallest job market in professional sports. When watching a hockey game, it looks like there are a lot of players down there. To simplify this truly outstanding game, we are going to explore how many players are on a hockey team from the NHL to some of the smaller leagues.

The NHL is the gold standard when it comes to the sport of ice hockey and most leagues around the planet follow their example, some leagues have minor variations. For a game roster, an NHL can dress 20 players. The dressed roster usually breaks down to 12 forwards, making up four lines of three players. NHL lines are made of three forward positions, left wing, right wing, and center; centers take the faceoff unless kicked out of the circle. Then they also typically dress six defensemen, three pairs of two.

Sometimes an NHL team will forgo dressing 12 forwards and dress 11 with seven defensemen. Typically, rotating wings between three centers. They do this typically for games when they need to sure up their defense. The last two positions are for the goalies, the starter, and the backup. The backup can go in at anytime due to injury or the coach pulling the goalie, this rule does not apply for a shootout.

Outside of a dressed roster, NHL teams typically carry up to 23 players that can be slotted into games. The extra three players are “usually” one forward, one defensemen and a third goalie. NHL teams can always call players up from their affiliate teams in the AHL (American Hockey League) and ECHL (East Coast Hockey League). NHL rosters can go over 23 players due to injury; these players are usually placed on injury reserve (IR) or long-term injury reserve (LTR).

This is where NHL clubs can get complicated. NHL clubs can have up to 90 players on their reserve lists, this number comes from signed players and unsigned players. Unsigned players are players who are drafted and not signed to an NHL contract. This happens for a number of reasons. The first of which being that NHL teams can only have 50 players under NHL contracts. These are players playing in the NHL or in the AHL or ECHL. They can also be players that are signed to their entry level contract (ELC) and are playing in the Canadian Hockey League (CHL, comprised of the Western Hockey League (WHL), Ontario Hockey League (OHL), and the Quebec Major Junior Hockey League (QMJHL). It is important to note that if a player is drafted by the NHL and is playing NCAA hockey, they cannot sign an ELC and still play in the NCAA due to their rules. This can make teams not want to draft NCAA players. The second reason players will be drafted and not signed to an entry level contract is because the club feels they need to season in juniors or overseas a little longer.

NHL teams typically hold on to the signing rights of drafted players for 2 to 3 years after a player is drafted. Some teams may choose to not sign a player, making the player either re-eligible to be draft or simply become a free agent.

NHL teams are also required by NHL rule to keep an emergency backup goalie (EBUG) in every NHL arena for every single NHL game, playoffs included. The emergency goalie is not a professional athlete, and typically has played some form of high-level competitive hockey in their lives. They are not contracted players and usually sit in the stands during the game. These goalies only come into the game when or if both starting and backup goalie are injured, or if for some reason a team cannot field a second goalie.

The most famous emergency backup in the NHL is David Ayers. David Ayers was the Zamboni driver and emergency goalie for the Toronto Maple Leafs and would practice with the Leafs AHL team, the Marlies. On February 20th, 2020, both James Riemer and Petr Mrazek were injured for the Carolina Hurricanes and Ayers entered the game wearing Leafs goalie pads and a helmet and won the game for the Hurricanes, stopping eight out of the 10 shots he faced.

What is an NHL Black Ace? Well, after the NHL trade deadline, the limit of 23 players on the roster goes away. Black Aces are players that are added to a team’s roster at the beginning of the Stanley Cup Playoffs. These players practice with the NHL, sometimes in a separate session, and are expected to be ready to go at a moments notice during a game. These players typically play full-time for the NHL teams AHL or ECHL affiliate but are NHL contracted players. They usually do not join the team unless their AHL or ECHL team is eliminated from their respective playoffs. They participate in any Stanley Cup celebrations and have their names engraved on the legendary trophy. The term was first used by Eddie Shore in the 1940s referring to players coming back from an injury.

Due to too many reasons to list here, the NHL can only carry 23 players on a roster until the deadline. The same cannot be said for their primary development league in the AHL. Since the AHL is a developmental league, they do not have a limit on their roster and typically carry 23-25 players depending on their schedule and injuries to the team. Some AHL teams will sign players to AHL contracts and assigned them to ECHL until needed, typically due to two-way contract NHL players and prospects.

The East Coast Hockey League does it very differently. The ECHL is considered a premier AA league to the NHL, and the organizations benefit greatly from their NHL affiliations. ECHL teams can only carry a maximum of 20 players on their active roster and can only dress 18 players a game, two of which have to be goalies. They also have rules on how many veteran players a team may have on their roster, and that number is four. The Southern Professional Hockey League (SPHL) abides by similar rules as well.

NCAA clubs are also similar with the ECHL and SPHL when it comes to their rosters. College athletes are not paid, obviously, and are only allowed to have 18 scholarship players on their roster. Some colleges also have different rules when it comes to roster size and how many players may be taken on a road trip. Again, NCAA players cannot sign an NHL contract and still play in the NCAA. There is a difference between D-1 and D-2 schools and D-3 and that is that D-3 teams cannot offer scholarships.

Other Forms of Hockey and Youth Hockey

There are multiple other forms of hockey that are played around the world such as roller hockey, dek hockey and field hockey. Field hockey for example only carriers 22 average players at the college level but only 11 players can play at one time. Roller hockey doesn’t have an NCAA league and is typically only played competitively in youth sports or adult leagues. There is no limit to how many players can be on a team but play time to cost can be eschewed when too man players are on one team. This goes for dek hockey as well (floor hockey), where it is typically a pay to play sport with no roster rules besides how many players a team is willing to have. When it comes to youth hockey teams, it really depends.

Some high school teams can have 30 players and 20 dressed but it really depends on the league the schools find themselves in. The same can be passed down to other levels of hockey by age but it really comes down to the number of players versus time in a game and coaches like to make sure everyone gets their time on the ice. Some more competitive leagues or junior prep teams will have a roster limit of 25 players or so.

So, how many players are on a hockey team? It will depends on the level of the roster of a hockey team. When it comes to leagues like the NHL and AHL there are players unions involved and many factors that juristic the roster sizes of a team. The NHL is very particular when it comes to their salary cap and roster sizes. When you get down to non-NHL or NCAA teams, the rosters get wild in size, especially at the youth level of the sport, but it really all depends on the rules of that particular organization or league!

How Long Is Hockey Game?

Custom Sticks For Hockey Athletes
Copyright © 1995 - 2022 by FinnStar
Contact Us
Email: info@finnstarhockey.com
Contact us today, reply within 8 hours
Location
No.241, Commercial Rd., Huadu District, Gunangzhou, China
FinnStar
Provide hockey related products: hockey sticks, hockey skate, hockey ball, etc.
Terms
Privacy Policy
We use cookies in order to give you the best possible experience on our website. By continuing to use this site, you agree to our use of cookies.
Accept